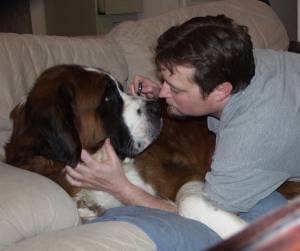 I want to take a second to say thank you to all the people who have called and/or written with their condolences. I am truly thankful to have so many great friends and family members and I appreciate all the support.

I thought I would also give the complete rundown of what led to Sam’s passing – as much for exercising of personal demons as to explain to those of you still unclear about the details. (CAUTION: What follows is sad and very emotional – I stopped to cry three times while writing it and cried again when I reread it.)

Being a very large dog, Sam was stricken with hip dysplasia. As a result of this condition, Sam’s rear legs had slowly degraded in size and range of motion. While he was still able to get around, Sammy walked stiffly and from time to time his hind legs betrayed him enough to give him trouble getting up or moving quickly. A little over a week ago, the always-stoic Samson started limping while favoring his right front leg. He never really showed too many signs of pain or discomfort – an occasional whimper when he moved the leg wrong and a sad glance my way was the extent of his complaining.

Thinking the limp was some acute overuse injury, I decided to give it a little time and see if it got better. It would get a little better and he would move more freely and then without warning would go back to being more severe. After a week of spending most of the day on the couch and limping when it was time to go out, I decided to take him to the vet. The idea was to see if he had dislocated his shoulder or had some other treatable injury.

The ride to the vet was very tough as I had to lift him into the vehicle and out. He also had a lot of trouble with the slick floor of the vets office. (I think these floors are reprehensible and obviously put in place for ease of cleaning with no concern for the comfort or needs of their patients.)

The vet and I agreed on a set of xrays to determine what was going in the troubled limb and I helped get him into the xray room. The waiting room was a horrible experience as I spent what seemed like eternity, but was actually about 15 minutes waiting to hear the results. The doctor returned with the xrays and a very long face.

The problem with Sam’s leg was cancer of the long-bones… a common form of cancer in large breed dogs. The vet was amazed at how far the disease had progressed and that Sam was able to walk at all. He was also shocked that Sam was not constantly whimpering in pain… but Sam was like that – a very tough dog that never complained. His prognosis was 1 to 3 months to live at the outside.

The options I was given were a) treat the cancer with chemotherapy and the pain with pain killers, b) do nothing and let nature take its course, or c) put him to sleep.

I was told that treating him would possibly prolong his life by a month or two and would put him in a zombie drugged-up state. It would also require him to be carried from room to room – assisted in his trips outside to use the bathroom and he would not be very responsive throughout. Doing nothing would increase his pain substantially as the final months ticked by and would not only entail the same assistance, but it would also be painful to him each time he was moved. The final option seemed the most humane… I really could not see making his pain last any longer.

When the doctor left the room, I lost it… my body heaved and convulsed in violent jerks as the realization that I was losing my closest friend sunk in. Not only had he lived with me for the past ten years, he shared my joys, my pain, my food, heck, he even slept in the same bed. My head swam with thoughts of guilt over giving the okay and thoughts that not doing so would be selfish on my part.

An attendant came in with a paper to sign with which I acknowledged my consent. In addition, she wanted to handle the payment for the visit before the procedure… makes sense from their standpoint, but just seemed so cold.

With the paperwork completed and my composure regained, I was led to the back room. One step into the room and all heads turned to face me. At least a half dozen vets and assistants all turned to see the guy who was losing his friend. I was composed, although I imagine very red-eyed from the waiting room breakdown. I glanced down and saw that Sam was laying on a large blanket on the floor resting. That glance nearly killed me. Again, I lost control of myself and sobbed in large heaving jerks. I had to stop walking because I couldn’t see as tears flowed in a torrent down my cheeks. I convulsed over and over with my face in my hands standing in the middle of the room… all eyes on my pain.

After again regaining control, I went to Sam and lay prostrate on the floor face to face with my bud. I petted his face and kissed his snout. He raised his head and licked my face and for a third time I violently wept. I hugged him so close and kissed him over and over while petting him profusely. With my face buried in his and my body heaving in pain, the doctor said, “Let me know when you are ready.” I couldn’t say anything once again. I couldn’t tell them to go ahead, I couldn’t tell them to stop, they vanished from my awareness altogether.

The sound of the doctor sounded far away and muffled… “Are you ready?” “Should we do it now?” Again, no words were available for anyone but Sam. Covered in tears, with dog hairs stuck to soaked face I nodded quickly to the vet and again buried my face deep in his. “I love you buddy” “You’re my good boy” “I love you Sammy”

It was horrible as they couldn’t hit the vein for the injection. I was crying like a schoolgirl, hugging my beautiful buddy, and desperately trying to make sure he knew the depth of my feelings for him – while they were consulting over how to get the needle in. I wanted to scream, “STOP! I changed my mind! Please don’t do it! STOP STOP STOP!” But, I couldn’t. I couldn’t take a break from loving Sam. I couldn’t let him go on in pain and couldn’t go on without him. I have never felt so helpless and useless in my life. The only thing I knew how to do was to love my best friend, so I did it. I did it with all my power. I did it without regard to how I looked. All that mattered was that I do it. The only thing I had in the world at that instance was my love for my Samson.

The procedure finally happened and Sam’s breathing slowed and then stopped. I continued sobbing through many more “I love you buddy” “You’re my big boy” “You’re my Sammy” “I love you Sammy.” He was still warm, he was still Sam, he was still there damn it, and I still loved him. Over and over I wept and proclaimed my devotion, all the while locked in a full hug around his neck and smothered in his fur. Then, as if in answer, after being still for over a minute – he let out one large sigh. The doctor had warned me while in the waiting room that this would happen but just as I thought I had reached the absolute bottom, that sigh ripped me apart. Here I was, a full-grown man laying face down on the floor at the vet’s office, hugging my dead dog and crying like a child. I have never felt so destroyed nor so alive.

In my life, I have only cried over four events from the time I was a teenager through today. Even the tears caused by the sight of my father in a casket did not compare to the depth of pain I felt in losing Sam. I couldn’t speak for hours afterwards. I left garbled messages for friends and family that Sam was gone and that I did not feel like talking. I am not sure what stage of the famous Seven Stages of Grief I am currently in… but I know that writing this helps.

What does a cat do on a gorgeous day?

Sometimes they spend our money wisely

Lou seems to be bonding