It’s baaaaaack!!! Cycling fans have been jonesing for some racing action since Lance Armstrong won his record 6th straight Tour de France. Lance started out the year by announcing that he intends to race in the Tour again this year as he tries to put the win record out of reach at an amazing seven straight. In the meantime, his team – Team Postal has disbanded and Team Discovery Channel has formed as his new sponsor.

As an avid “roadie” a winter of lame riding weather and no cycling covering is tough to endure… it is this time of year, the spring classics, that signals end of the long winter.

There are other races before Paris-Nice, but it always seems like the real start of the racing season. This year it really can be considered the start of the seaon as it is the first event on the newly-formed Pro Tour. On February 27, Discovery Channel cycling got their first win as George Hincapie took top honors at the Kurne – Brussels race in Belgium.

OLN – Outdoor Life Network has been a bastion of cycling covering in a country that for the most part ignores professional cycling… this year their coverage will not only be bigger and “hopefully” better than before, but they started their Cyclism Sundays this weekend with the Paris-Nice race. It is Lance’s first race of 2005. A one and half hour wrapup of the prologue of this 8- day stage race was just what the doctor ordered for those of us craving some serious road racing.

So how did team Discovery Channel fare? Well,, when once Paris-Nice was considered a big deal for Armstrong, it is purely a tune-up race now. It is a way to judge his early season conditioning enroute to peaking for the Tour de France. After the prologue, none of the Team Discovery figured into the leadership of the race. Lance took it easy on this time trial and sat in 140th position after the day of riding. Jens Voigt (CSC) held the race lead by two seconds.

Stage one was run today and Igor Gonzalez de Galdeano and Fabien Sanchez escaped in an early breakway on the 180km race. After a large crash in the peloton and some scrambling to regroup however, the two were caught and stage one looked to come down to a sprint finish. Tom Boonen (Quick Step) pushed strong over the last few hundred meters to take the stage win, while Erik Dekker (Rabobank) moved into first place overall thanks to some time bonuses.

Team Discovery’s top position is #21 which has team manager, Johan Bruyneel upset at their performance, “I’m not happy at all with the results of the team from yesterday. I want them to be in the race, not at the back of it. We had a talk about it and I know we will improve. At this race, we still hope to have someone finish in the top 10 and I am confident we can do that – someone like Savoldelli, Popovych, Azevedo or Chechu.”

It really doesn’t matter to me how they do in this race – all that matters is that cycling is back! 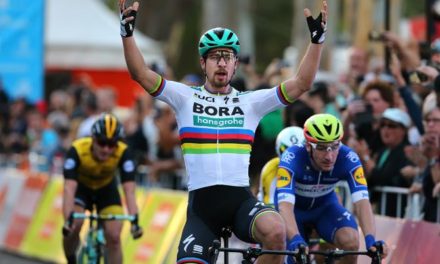