The Mouth has a broken hand

Way to go Jerry Jones, once again, you have proven what an absolutely rotten football mind you have… and what total disregard you have for doing what is “right.” It appears that you are getting your comeuppance on the Terrell Owens deal. Add his broken hand to his mysterious hamstring injury and it sure doesn’t seem like a very good investment… and you know what Jerry? You two deserve each other.

Let’s take a look at the major screwups since you soiled the Cowboys by purchasing them.

1- You fired Tom Landry. (what a way to get off on the wrong foot with Cowboy fans)
2- You hire Jimmy Johnson. (the ONLY good move you have EVER made as an owner)
3- You fought with Johnson over the most ridiculous things despite the fact that he created a dynasty that could have rivaled the days of old. (albeit with more crack)
4- You fire Johnson and hire Switzer. (You replace the two-time defending SuperBowl Championship coach that built an amazing team with a mental midget that couldn’t command the respect of a ladybug)
5- You fire Switzer and hire Chan Gailey. (I am guessing you realized that Switzer was the one that needed to wear the helmet, but Chan Gailey was just someone you knew you could control)
6- You fire Gailey and blame him for strings you were pulling behind the scene. (Not that I thought Gailey could have done a whole lot if left to his own devices, but you stirring the pot ensured failure)
7- You insist the quarterback of the future for the Cowboys is Quincy Carter. (Even Quincy thought you had lost your mind on this one, he admitted between snorts of coke and attempts to learn remedial English)
8- Another new coach Dave Campo. (If ever someone was setup to fail, it was Campo – he would have been an excellent career assistance and you even ruined that Jerry)
9- You hire “the Tuna,” Bill Parcells. (What makes this a terrible move is that you are still meddling… if you would just crawl back in your hole and let him run things, the Cowboys might win again)
10- You force Terrell Owens on Parcells and the fans. (With a total disregard for your brand, a total disregard for history, and thus a total disregard for your fans, you hire this cancer)

So much damage to “America’s Team” in such little time.

These clothes make everyone look good! 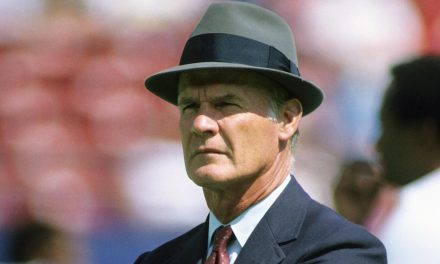