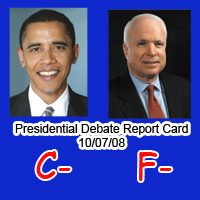 Well, the numbers for this debate were a lot different.  Okay, not all of the numbers were different, actually it was Barack Obama that had the dramatic change in his score.  Again, the criteria for grading is purely based on my opinion.

Interestingly enough, the percentage of combined comments that dealt with the economy and the bailout remained almost the same as the last one.  (See report card from previous debate) In the first debate, 44% of the comments were about the economy, and in this debate, 37% covered that subject.

The amount of time (again combined) that the candidates spent talking about foreign affairs took a dramatic turn from 56% in the first debate, to only 25% this time around.  This made way for subjects that were all but ignored in the first go-round – healthcare, energy, and domestic affairs.

Let’s start the ratings off with Spin.  Once again, the spin master was Senator McCain.

47% Spin – Slightly more spin this time around for John McCain (up 2%.)  Still shocking that nearly half of the time he is talking, it is an attempt to obfuscate.
25% Spin – Barrack Obama took a slight dip in his percentage of spin (down 2%.)  Nearly half as much spin as McCain.

The most important grade, as always, is when I take a look at what percentage of the time the candidates answer correctly.

64% Correct – Senator Obama must be reading some blogs because his “correct” score took a nice jump (up 8%.)  A 64 is still not a passing grade, but it is a heck of a lot closer to one.
28% Correct – I thought it would be impossible to score lower than his 29% from the last debate, but John McCain managed to get more wrong this time around.

As always, don’t trust me – watch the debate for yourself and make up your own mind and don’t forget to vote.

Book Review: It’s Called Work for a Reason!: Your Success Is Your Own Damn Fault 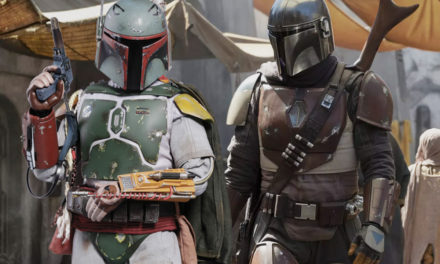 Save the environment by eating!

Not sure what I think about this yet… YouTube Movies?