I’ve already mentioned the serious numbers of scorpions around our new home in Wimberley, but thought it was time to mention a couple of the other critters we have in abundance.

The first one you cannot help but notice this time of year.  You may think the cacophony of sound you hear in and around the Wimberley valley is the cicada, but you’d be wrong.  It is the katydid.

This little booger makes a horrendous noise that can be heard day and night.  Talking on a cell phone while outside is nearly impossible.

Another cool crawly that we have a lot of around here are walking sticks.   Not only are these MUCH bigger than any I have ever scene along the Gulf Coast, they are just too cool.  The fact that they are endangered makes their numbers and size around here that much cooler.  This one is nearly 8 inches long! 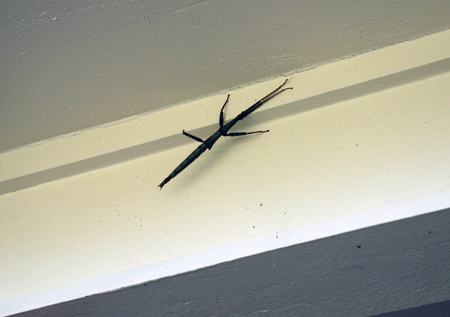 So yeah, we have some scorpions, huge centipedes and even rattlesnakes, but there is a lot of coolness to the Hill Country as well.

Cloud Rainbow? Guess I just fell off the turnip truck

Living on One Dollar