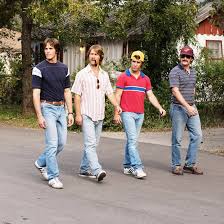 Be prepared for a movie packed with nothing

I watched Everybody Wants Some written and directed by Richard Linklater which bills itself as “in the vein of Dazed and Confused.” It should have said “in the vein of uninteresting and pointless.” I do like some of his stuff – this just isn’t one. The photo above shows one of the most exciting scenes in the film – yes, they are literally just walking.

I did love the 80’s music played throughout. (at least three of my rating stars are for the music) Yes, I even like a lot of the cast. What I didn’t like was just how little of a story it had to tell. This is a classic “day in the life” story without an antagonist, without a goal, without a plot, without character arcs… just a snippet of time – a couple of days before the start of a college semester.

I kept waiting for a story-line, something the characters had to accomplish, some challenge, something to root for. It was over by the time I realized it wasn’t going to happen. I still have no idea what “everybody wants” in the title.

I guess if you’re really bored and want some mindless viewing with a decent soundtrack, this will do. Or, maybe you’re sitting around with friends needing something to watch – the IQ drop that happens when groups watch a film together may make it more palatable. Heck, even if you just want to watch and rip on it the whole time, it will do.

If you want a good film and a good use of your time, this is not it.

A gaggle of chick-flicks